The store will not work correctly in the case when cookies are disabled.

Did you see us at Grand Designs Live? Shop our show stand here

Choosing a projector screen size for your home cinema 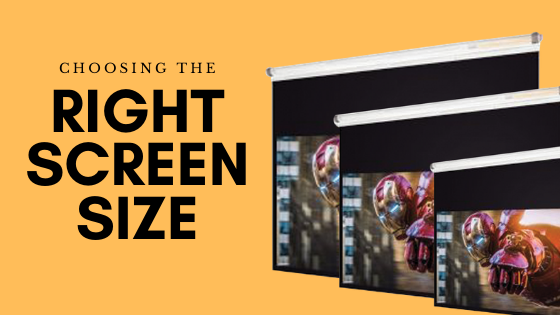 When designing your home cinema one of the considerations will be which screen size to go for.

All too often people make the mistake of choosing the biggest projector screen size possible. This can be problematic for a whole host of reasons.

The reason people go bigger is that they are looking to get the most cinematic experience possible. A screen, which is too big for the room, will however be difficult for viewers to see in its entirety. Resulting in strained eyes or uncomfortable seating positions.

Bigger does not mean a clearer picture. If you enlarge an image over a greater space, you could lose some of the clarity. For instance, a larger screen will magnify pixels across a greater distance, meaning objects appear less detailed than if they were projected onto a smaller screen which will pack pixels in more densely.

Distance from the screen

Selecting the right screen size will give the most comfortable viewing experience. If you want to get it right this should be calculated based on how far away you are sitting, and remember! Screens are measured in width, so you need to be sitting 1.5 to 2 times the width of the screen away. To give you a guide to which screen to choose please see the table below:

Another important factor is the viewing angle. This refers to the angle from each corner of the display screen to the centre of the seating position. It is an important consideration because you don’t want the image to exceed how much your eyes can actually take. If you are struggling to visualise how the screen might look in your home then simply get masking tape and mark it out. There is no exact science to this but, when stood in your usual seating position you should have a viewing angle of around 30 degrees from centre left and right.

What is throw distance?

If you have been shopping around for projectors for your home cinema you will probably have seen the term “throw distance”. But what does this mean? Essentially, a projector’s throw distance is the distance between the projector and the image on the screen. Usually, projectors are categorised as one of the following three types:

Perfect for smaller spaces and portable projector setups, typically they have a throw distance of between 0 to 1.5m from the projector to screen.

The aim of these projectors is to produce as large of an image within the shortest amount of space between the projector and the screen.

These are the most popular projectors as they produce the best quality picture for home theatres. The throw distance is usually the same as the viewing distance.

All projectors have different throw ratios. This simply determines the minimum and maximum distance from the projector to the screen. This throw difference is determined by the size of screen. To see a table with specific throw distances on please click here.

If you need more help selecting the correct screen size our friendly staff will be happy to talk you through your particular project. Simply give them a call on 01952 898 533